In 2006 when Josaia Frank Bainimarama took power in Fiji by force, and began to declare his many different reasons for taking over the country, no one could predict just how his lust for power would corrupt and then absolutely corrupt.

Today June 7th 2013 is when he and his legal advisor decreed that all registered political parties must declare their financial interests. However both Bainimarama and Kaiyum are both excempt from revealing their own ill gotten gains.

Back in 2008 , we saw the first of many exceptions to the rule in terms of payments to regime members . We can reveal that the payments listed below also include entertainment , housing, phone / mobile, traveling  and other allowances; as well as cost of living adjustments every year to the tune of 4.6 to  5% .

But of course there has been no accountability nor transparency from that time onwards as to the state of taxpayer funding for regime portfolio holders, Josaia and Aiyarse Sayed included.


In 2011, Coup 4.5 managed to obtain figures from a source which revealed payments at that stage for government positions.

Many people have wondered why this is the reason they insisted on getting their monies paid via a private accounting firm run by Kaiyum's aunty Nur Bano and not through the usual channels where their payments would be subject to public scrutiny.

Today we reveal what inside sources have told us these two individuals are paying themselves from the public purse. Check it out and prepare to be disgusted. 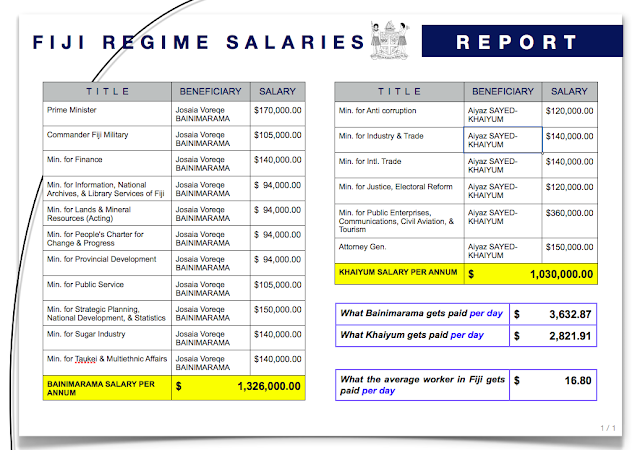 
Sign the petition for change put forward by all the combined political parties in Fiji here.

Posted by Discombobulated Bubu at 5:25 PM

" Who is trying to hide financial records and bank accounts other than the Regime?

These should be a matter of public record, not just audited accounts.

Whatever rules apply to political parties must also apply to the Regime, which is in effect an illegal political party running Fiji for the benefit of a few persons, namely the friends, relatives, and other criminal supporters of the Regime. "

Placed in this format and not visible to the naked eye before as it were, it is plain to see that between the two men there are 17 portfolio's involved which is simply ridiculous in any day or age.

I think there is truth in here that they feel like they owe it to themselves to collect. After all they seem to believe their own lies.

And this is just another coup for their personal accumulation of the resources available whilst in power.

And they were all against corruption!

I hear that a certain person has blown a gasket with all this "gossip" LOL. I also hear that aunty has been instructed to prepare documents that purport to show the magic sum of $96,000 for the PM (remember this figure was thrown out there for public consumption in 2009) with a few per diems thrown in for good measure here and there. They will try and keep the people quiet but is all part of the cover up of the lies these people are famous for.