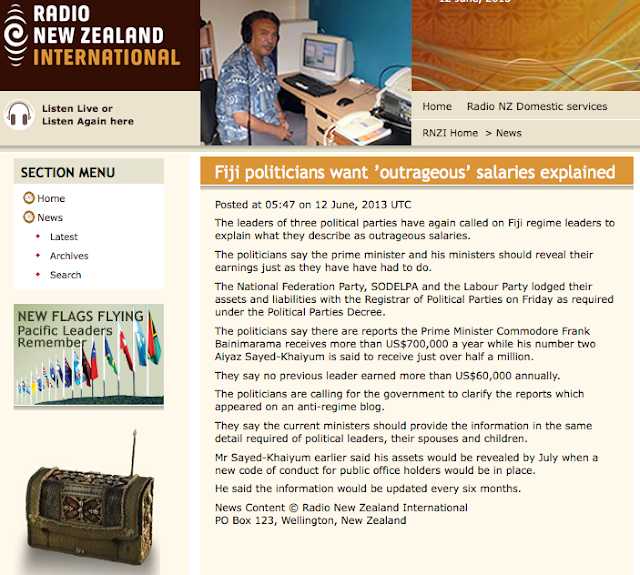 Try as the regime may to ignore the issue, this story will not go away .

More  information on how Bainimarama and Kaiyum are moving their slush funds around have continued to emerge. The consistent rumours and stories continue to get louder as it seems that the regime's influential, trusted and well connected Nur Bano Ali is more than Bainimarama's pay mistress.

We are hearing that the Hawaladar system enables Nur, Bainimarama and Kaiyum to move their funds quietly to their overseas tax haven accounts.

We hear also that certain of the Gang of 6 have purchased a penthouse in Sydney and another is investing in a restaurant in the same city. Bainimarama has a military trained son that is operating the Fijian end of an international and national security force which is not cheap to set up (and which in time will also become 'Daddy's' private army). Hardware such as guns and associated training equipment and operational venues are expensive to initialise, but capital expenditure to realise these objectives are easily traded so that excess funds are kept under the radar.

Associated with money moving to Dubai and Hong Kong are the recent regime 'initiatives' to recruit Fiji citizens to private security jobs and to housekeeping and nanny roles in the same countries. Our investigations continue, and anyone else with additional information is invited to contact us.

Apart from the methods of Hawaladar, the Reserve Bank allows one to get around 'restrictions' and cover their footprints by merely writing out an Invoice. Qorvis too must clearly be pleased.


Nur Bano Ali is also Bainimarama's black Hawaladar despite tweaked regulations and rhetoric from the respected and trusted head of the Fiji's FIU (Fiji Financial Intelligence Unit) Razim Buksh.
The public would love to know just how much space the elephant in his office is taking up and how much of the animal he has been told to ignore.

Financial Regulations and the Law

What is the value of any of our legal financial safeguards when the junta is in the habit of altering any law or regulation it doesn’t like any time it sees fit?

Fond of trotting out decrees for this and quoting decrees ad infinitum, Kaiyum is also quick to invoke "necessity" to get around things any time he thinks his Gang of 6 may be 'lawfully' restricted from doing what it wants to do.

And without the checks and balances present like free media, a functional lower house answerable to Parliament, or Opposition parties to act as watchdog to those ad hoc policy changes, what guarantees are there really of any transparency or accountability to what they do ?

The answer is zero . Zero + zero = zero.
So Fiji's taxpayers continue to be kept in the dark.

In most instances, Fiji's licensed dealers also perform unlicensed Hawaladar remittances, where money does not need to move across borders and remains 'under the radar'.

This will only increase when the IMF call for exchange decontrol is implemented.

Not only is Fiji a recruitment ground for terrorism in direct contravention of UN Security Council Resolution, it has now become a financial mecca of the Hawaladar variety.

Although we cannot rely on the objectivity and impartiality of the Razim Buksh sanctioned Nur Bano Ali black Hawaladar, there will be no escape from international scrutiny.

I'm afraid the days of 'waraka namaka' are over. Bainimarama and his cronies will in a very short time be held to account.


Sign the petition for change put forward by all the combined political parties in Fiji here.

Posted by Discombobulated Bubu at 7:23 PM

Thanks for this . We are finding it very interesting reading which is very strange concept to us but something we have to know.

For anyone else out there that wants to know more I came across this link:

HE is a monster of a son by all accounts. MELI BAINIMARAMA junior, the son of Fiji’s dictator Voreqe Bainimarama, shot to prominence when he appeared with his father’s treasonous troops at the residence of Laisenia Qarase to “capture” the democratically elected Prime Minister of Fiji in December 2006. Since that day, he has not looked back, indulging in wanton pleasure and profiteering on the ill-gotten gains of his father – the present illegal Prime Minister. Now, it has emerged that on 22 February 2013 he formed a Fiji chapter of Fijian Solutions International, a security and security training company. He is listed as director of the company, and operating out of 55 Siga Rd, Laucala Beach, Suva. And guess where he claims to be residing – yes – 70 Muanikau Rd, Ratu Sukuna Rd, which his father is occupying currently. The house is the former official residence of the sacked Chief Justice Daniel Fatiaki. According to highly placed military sources Meli Bainimarama, who is no longer a soldier, and his “security men” have unlimited access to army military training compounds and weapons from the RFMF armoury. The army sources claim that the company is a “front” for Meli and his men to take security charge of the future Prime Minister of Fiji after September 2014; i.e. Voreqe Bainimarama who will rig the elections to WIN and under his Draft Constitution the new Prime Minister will also be the Commander-in-Chief of the RFMF. Welcome to future Saddam Hussein and Sons type Fiji – where mob rule and violence might become the order of the Bainimarama clan.

Victor, can u name the gang of 6 so that we all know...pls

As a former soldier,i know that this would be possible for this MONSTER.he ran a special force unit formed in 2007,which operated in PNG,Solomons and Tonga.His men are the hardest to trace,many of whom were mercenaries in Afghanistan.Heard he also has a stake in the METH drug ring.