Nothing epitomizes the past eight years of media repression in Fiji better than the video of dictator Frank Bainimarama slapping a woman TV journalist in the face last week.

It captures not only the contempt with which Bainimarama has treated the press, but also the brutality with which he has treated people, including and especially women.

Now some of Bainimarama’s staunchest supporters are re-thinking whether he would make a fit leader for a democratic Fiji, as should all citizens in advance of Wednesday’s poll.


3News reporter Amanda Gillies was in Suva from New Zealand to cover the election campaign and approached Bainimarama at a rally.

“Can you promise there won’t be another coup,” she asked the obviously irritated dictator.

“Can you just move away from me?” replied Bainimarama, who told Gillies he didn’t want to discuss the subject.

He first pushed away her microphone, then began waving his hand in her face. “I will move away,” promised Gillies, who courageously refused to be intimidated and persisted as any good journalist should. “But I just want to know if you . . .”

She couldn’t finish her sentence because Bainimarama slapped her in the face, causing her to drop her microphone at the 12-second mark of this clip.

The video, which has been making the rounds on Facebook, has elicited a shocked response from viewers. Bainimarama has been rumored for years to have participated in the beating of women who were arrested for advocating democracy in the wake of his 2006 coup, including one who was pregnant.

He also famously condoned the beating of escaped prisoners last year after a video of the atrocity was posted to the Internet. But to watch as the prime minister gives the back of his hand to a woman leads to the inescapable conclusion that this thug is simply not fit for leadership.

As campaigning culminates, even some of Bainimarama's longest-serving sycophants are deserting his sinking ship. Crosbie Walsh posted a sheepish entry which he labelled a “Personal Confession” on his blog yesterday. “What if I’m wrong,” worried Croz.


When I started this blog in May 2007 it was to offset the distorted reporting of NZ journalist Michael Field, and I was writing mainly for an overseas audience. . . . Since then, as I read about what the Bainimarama government was doing and talked to a wide range of people in Fiji, my position gradually changed. . . . To make matters worse, a number of government-initiated judicial actions seemed personally charged and vindictive. And its failure to have public audits and reveal salaries laid it wide open to further charges by the Opposition.

If even crazy old Croz is questioning his beloved dictator, then you know Bainimarama is going down. “He’s a military man and he definitely has a very short fuse,” admitted Croz. “Parliament will be a very different environment. If FijFirst wins and Bainimarama forms Fiji’s next government, his power will be limited by law.”

Bainimarama is normally a friendly person who enjoys being with people. I am optimistic that this positive side of his personality will be used to good effect in Parliament, and the “short fuse” kept in check. 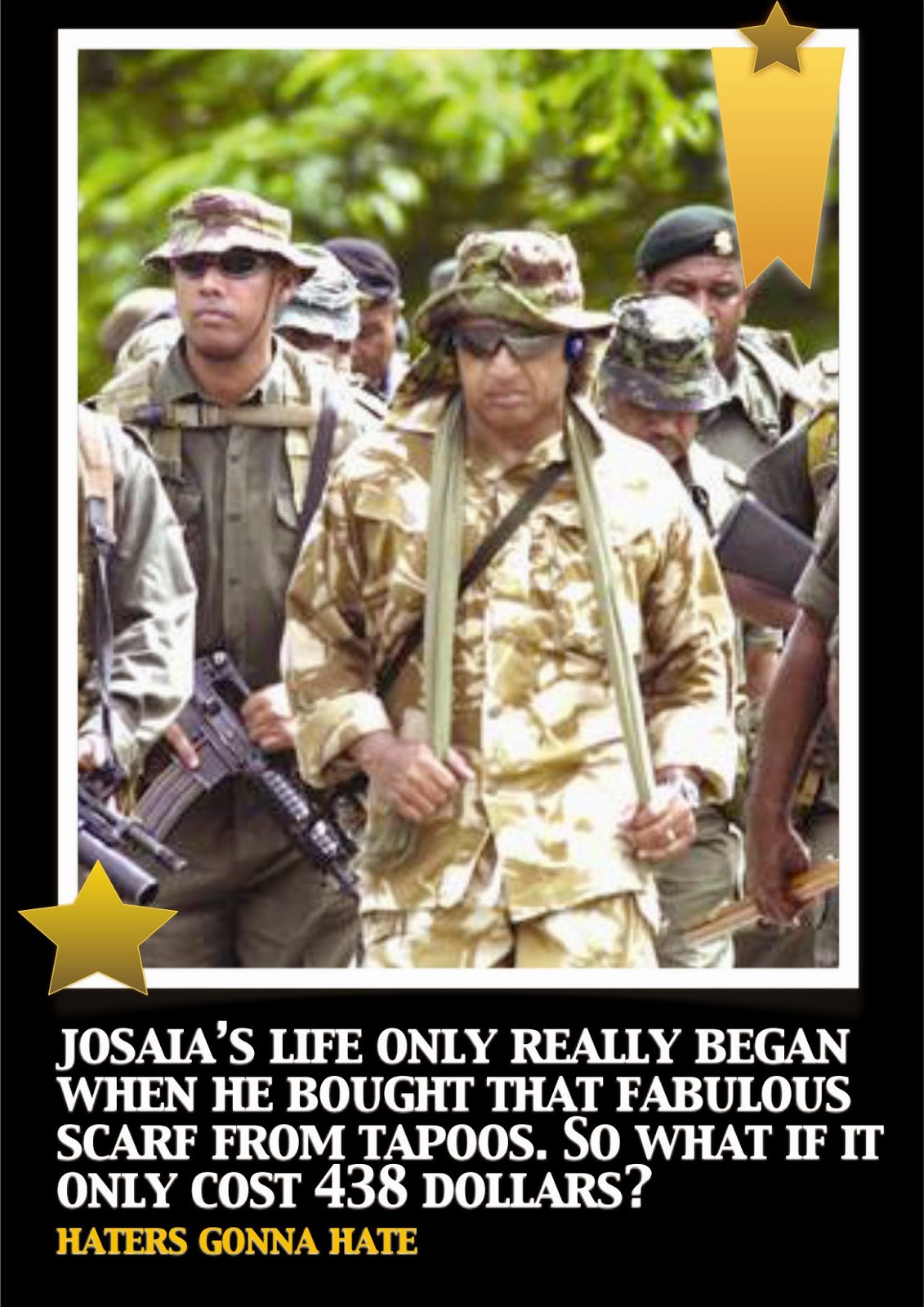 This incident is only the latest in a long line of erratic and even violent behavior by Fiji's self-appointed prime minister.
Former U.S. ambassador Larry Dinger outlined a litany of abuse in cables made public in 2011 by Wikileaks. Dinger quipped that “a psychiatrist would have a field day with Bainimarama,” reported the Sydney Morning Herald.

The US embassy reports also document cases of rape and sexual assault by military personnel, including at least one instance of a group of detainees forced to engage in group sexual acts. In another case a prominent human rights activist was “felt up” by a senior military officer and was “warned she would receive worse treatment unless she stopped her activities.”

Then, of course, there is Bainimarama’s shameful treatment of Father Kevin Barr, a former supporter who made the mistake of joking in a letter to the editor last year that, given the loans received from that country, Fiji should consider incorporating the flag of China into its flag instead of the Union Jack.

The Catholic priest recounted then receiving a telephone call from an angry Bainimarama, who called him “a f*&^%$ up priest.” Then came the text messages. “F*&^% U arsehole, . . Start saying your goodbyes Father Kevin James Barr,  Australian national, work permit as a missionary, expiry date for permit 31/12/2013. . . Go and be  a missionary in China.”

Tales of Bainimarama’s out-of-control drinking have long circulated around Suva, including one recent incident in which he is said to have publicly soiled himself. It would be understandable if the citizens of Fiji decided on Wednesday that such an idiot, thug and monster is not fit to lead their country.
Posted by Discombobulated Bubu at 1:53 AM