The Spirit of Freedom in Fiji

Not everyone has a blog, although almost anyone can start a blog. It takes a while to build up a readership, however. ...... Fiji Media Wars has now passed 100,000 page views, which compared to many blogs is small potatoes. But I know FMW has a dedicated readership, and events in Fiji have reached a point where many wish to speak out about what has gone on there for the past eight years.

The climate of fear that has visited the country during Bainimarama’s reign of terror has prevented much of his abuse from going unreported. The question becomes, how much truth can come out in the next two days? Here is a first installment. There is no video, or else I am sure it would be much more impactful.

I want to share with you a short explanation of one of the reasons why I feel Frank Bainimarama cannot be allowed to run Fiji.

I have seen the true face of Bainimarama’s leadership. I know many people in Fiji share the same experience as I do.

Christmas Eve 2006, myself and other pro-democracy activists were taken from our homes late at night and brought to the QEB Military Camp under the guise of a meeting with the Military Council. What happened instead was an attack on all of us.

When I was brought into the camp, there are two things that directly stood out for me. One is that all the lights in the QEB Camp were turned off and secondly was the overbearing smell of Alcohol.

I recall the events of that night clearly. It involved soldiers punching and kicking us, and threatening to murder us. At one point, I was certain that I would not leave that place alive. 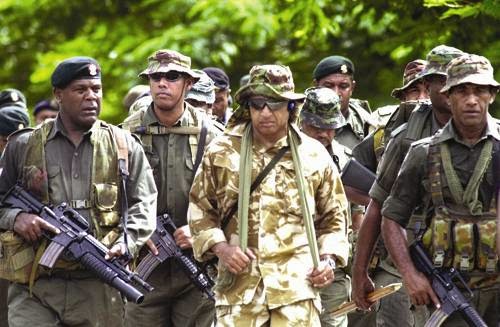 Notable people at the QEB Military Camp that night were Frank Bainimarama, Roko Ului Mara and Pita Driti, all visible under the moonlight. Only a group of about 15 men were involved in the attack. While we were been attacked by a few soldiers in the army ground, I looked up to see Frank Bainimarama kicking and verbally abusing me. He called soldiers to come and drag me to the cricket pitch.

On the cricket pitch soldiers were ordered by someone to run over us and I recall been told at this point to keep my head down. A soldier came to me and pulled me by the hair, and started cutting patches of my hair off. I was told that he would cut me up and throw me in the sea – that no one would care about me.

During this assault, there were men singing Christmas Carols by the Ground and cheering on their peers. I also recall been ordered to run to Lami and take down banners at the Vugalei Democracy Shrine. While we ran, I was especially targeted by three soldiers who kept hitting and swearing at me. They later pinned me down, and proceeded to kick and punch me, they put me in a military truck and drove up towards Nadua Secondary School, where they literally threw me out of the moving Truck.

At this point, another truck with a different set of soldiers, took me back to the Military Camp. A soldier in this Truck gave me water and asked for Apologies. He told me that not all soldiers were doing this and they were following orders ‘from the top’. When I reached the camp, I was hurried into a cell; and joined by 3 soldier who told me that Bainimarama was very angry with my comments.

They proceeded to further torture me, trying to get me to promise to never speak out against Bainimarama. This point of the ordeal was very traumatic.

Another soldier with the voice similar to Roko Ului intervened and told off the people in the cell, He ordered that the beatings stop, and after this they put me in a car and they drove me out towards Nabua Secondary School, where they asked me to get off. I recall been helped by two young boys from here, who took me to the Matua Taxi Base in Mead Road, where I got onto a Taxi and went straight home to a family that was clearly angered at what the Military had done.

All soldiers that participated in the attack smelled of Alcohol.

I was told that night, to leave Suva. I left on Boxing day for Levuka where I was informed by my Family that someone had sent soldiers to my house in Suva, to take me in for another meeting. I was later on informed via the media that I was put on a travel ban.

I recall thinking to myself, that if these men with Guns feared a young person’s mouth or opinions, then I was definitely in the right.  That’s why they fear us, because we breathe and preach Freedom. We are willing to die to purchase a better Fiji. I have never gone silent and since then I have been arrested 3 times for just speaking out against the Bainimarama Government.

And in joining SODELPA I have invested much of my energy and time into ensuring many young people understand the Dictatorship we are trying to dethrone. Every day I report to the SODELPA Office and stand alongside many other Freedom Fighters who have been arrested and abused for refusing to accept the Coup of 2006. There is a sense of Honor in their daily activities, a dedication to serving people and safeguarding Fiji.

We do not have a bad Military. We just have very bad self serving leaders.

This man Frank Bainimarama is a paranoid control freak, a man who masks all his crimes with Freebies and Development. Do not be fooled, Frank is afraid of you! He is afraid that more people will hear the truth about the bitter road we have had to endure for the last 8 years. Frank Bainimarama is pumping as much resources as he can in order to prevent the TRUTH from been heard. WE the People, have a simple solution - Change the Government.

Friends, after all the nepotism, militarisation of the State, the corruption, the Torture and the Intimidation, and even after all the deaths at the hands of the State, we have been asked to now vote for a Government of the People. And Bainimarama is pretending to be a Saint or our Savior.

When election day comes, I know it will be an emotional day for me and many other people in Fiji. My Hopes, Anger, Aspirations and Dreams will all rest on that tick. I pray that this message can be used, to show the true heart of people in SODELPA. For Freedom Hope and Glory and an end to the COUP CULTURE.

Posted by Discombobulated Bubu at 11:19 PM

Email ThisBlogThis!Share to TwitterShare to FacebookShare to Pinterest
Labels: The Spirit of Freedom in Fiji