Taxpayers and Workers of Fiji speak 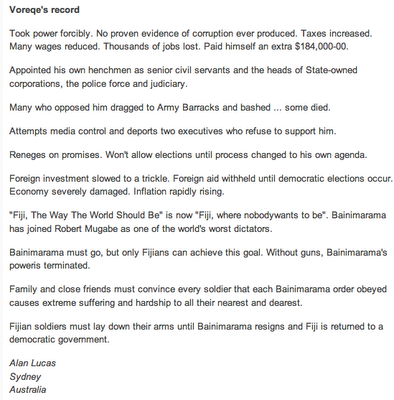 A sampling of the letters that the daily papers are receiving of late.
Posted by Discombobulated Bubu at 9:16 AM

Email ThisBlogThis!Share to TwitterShare to FacebookShare to Pinterest
Labels: Taxpayers and Workers of Fiji speak

Allow me to also include this letter which I cant find online for you , but it was from Maika Namudu
who is of course the General secretary of the FIJIAN TEACHERS ASOCIATION.
...................

I REFER to the statement by Felix Anthony, the secretary of the Fiji Trade Union Congress, on the FTUC's 2008 annual report.

Mr Anthony would be most naive to regard 30,000 as little because such workers are responsible for about 210,000 lives i.e seven family members per worker or about 25 per cent of the population.

The fact that the retirement age has been restored at 60 years by the High Court on behalf of some 20,000 workers suggests the resistance to the coup was not "little'' as reported.

Does the civil society include the people in the villages, the districts and the provinces?

The various "human rights'' bodies are all part of civil society groups. Over 90 per cent of them oppose the takeover. That is not a "little resistance'' by any standard.

In essence therefore, what Mr Anthony needs to realise is that NGOs, civil society groups and trade unions make up well over 60 per cent of the population. Their resistance is therefore not "little".

Perhaps the ILO is more aware of the fact that reports by the responsible groups have not been balanced. Thus the need for two union bodies so that a report from one group provides a counter-balance to the report of the other.

Then there are of course the UN groups and diplomatic offices in the country that give credence to such annual reports.

It might also be worth noting there is a spirit of general humility, calm and restraint throughout Fiji today. This is the result of the prayers of the righteous who have the interest of the people at heart.

This is the same spirit present in Fiji when the first missionaries arrived in 1835 and which led to the cannibals laying down their arms and their heathen practices.

The "little" resistance could be the result of spiritual forces at play - not because the people of Fiji approve of the coup.