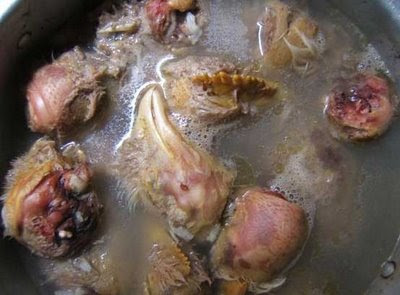 Great letter that we publish below from Mr Lockington (Fiji Times online).

For those that don't know what this letter alludes to, it highlights not only what Fiji mercenary chicken companies are doing , but also these distressed and wretched times in Fiji where people cannot afford protein anymore and have to resort to eating chicken heads for sustenance.

It is clear the Military regime does not care one iota about the effects their egocentric, self-serving and mercenary actions have had on the country.

Instead they steal from the national coffers rewarding themselves with massive pay cheques, take fruitless trips across the world, and purchase new uniforms and guns for their men.

NOT too long ago lamb flaps was banned because of the amount of fat in it. It was cheap and if people wanted meat, that was it.

Chicken heads used to cut off and thrown away, now it is a meal.

Chicken legs are a delicacy and I am told that if cooked well, it can cure bone disease. However, the side effect is the "yava ni toa" syndrome.

It makes you wander all over the place.

Chicken neck is also sold separately and I can remember a cousin buying a lot of it to make soup. When asked why she loved it so much, she whispered sly, "I was told that it can make you sing better".

The side effect that I know of is it will make you talk a lot. Then there is the chicken tail sold in supermarkets. I haven't researched that yet. I wonder what side effect it will have.

But seriously, because of rising inflation, people will do desperate things to survive. And business people will tap into people's helplessness.

Posted by Discombobulated Bubu at 12:18 PM

Email ThisBlogThis!Share to TwitterShare to FacebookShare to Pinterest
Labels: Heading no where

Bubu, can someone cook up a couple of pili's of this soon-to-be-our-national dish and send it by DHL to the really "needy" people in our society .... Sereana Qoro, Teleni, Michael Scott, John Sami, Vorevore, Father Barr, Iloilo and Rabuka.... just some of those needing to experience this vibrant quivering dish so beloved by the masses.