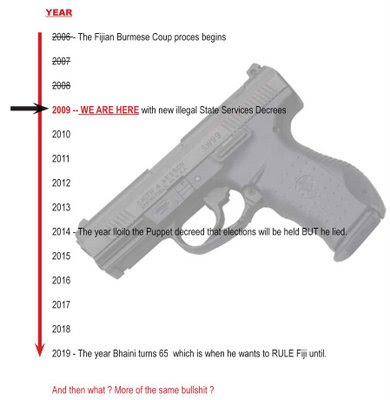 Thanks to Coup 4.5 for this analysis of what it means for us people of Fiji to be living under the rule of gun-toting criminals from today.

Vinaka also to my regular correspondent who supplies my graphics for this meaningful illustration (click on the image to enlarge it and you can print it out to show your friends) showing the many years we are to suffer if we do not rise against this evil and demonic regime now spreading its tentacles across our nation.

By 2019 , (if Bainimarama and his renegade military last this long), he will be hoping that as an older man, people will have either forgotten or be happy to forgive him because of his age.

By 2019. I will be 70 years old and all my grandchildren will have grown into the 20’s and 30’s living under the rule of this despot and his men who are making the rules up as they go along.

This is not what I subscribed to when I was born and I am quite certain this is not God’s plan for Fiji and for me or the makabunas.

Surely we owe this to our future generations to come ?

For your interest too Bubu, this article points out why people should not visit Fiji :

The regime of Frank Bainimarama has all the hallmarks of despotism, no matter how noble his aims may seem, writes Paul Daley.

Australia, you'd like to think, would take a whopping big stick to the khaki-clad backside of a megalomaniac like Fiji's leader Frank Bainimarama.

But instead, it seems, the Federal Government would quite like you to go to his country for a holiday.

The general has, after all, just consolidated his power after his lackey president ripped up the Constitution and sacked the judiciary. And the first thing Big Frank did? He sacked all constitutional office holders including the Ombudsman, the Auditor-General, the Director of Public Prosecutions, the police chief and the Reserve Bank Governor.

Then he imposed the type of media censorship that might seem excessive under some more notorious authoritarian regimes. There's an implied threat that anyone who challenges the Big Banana could face some serious intimidation including, perhaps, slammer time - or worse.

Kevin Rudd was appropriately quick to unequivocally condemn Bainimarama's actions, pointing out that Fiji was now "virtually a military dictatorship".

This was a characteristic understatement from a prime minister who knows too well the incendiary nature of words in diplomacy.

For despite Bainimarama's very admirable aims since his 2006 coup, of electoral reform and greater racial equality, his methods indicate Fiji is in a state far more serious than virtual military dictatorship.

All the atmospherics of despotism (the suspension of the rule of law, an economy on the brink of collapse, the imposition of military rule, the quashing of dissent and the assumption of power by a quirky soldier unable to brook any criticism) are already at play.

Foreign Minister Stephen Smith has rightly pointed out that Australia has led the way on the imposition of sanctions against Fiji since 2006.

Since then Canberra has had a ban on senior members of Bainimarama's regime and their families visiting Australia. Our Government has also seriously curtailed its once-close military co-operation with Fiji (like our military ties with Indonesia, such cooperation was supposed to give Australia influence over the Fijian Army) and suspended parts of its aid program.

"We are at the forefront of [international] sanctions, so we're not necessarily contemplating additional sanctions of our own," Smith said. "One of the things that we've always wanted to do is to try and get the regime back to democracy. We don't want to do things which have an adverse impact on the people of Fiji themselves. And one thing we have seen since Fiji moved away from democracy . . . has been a very serious deleterious impact on Fiji's economic and social circumstances."

Smith's department has urged Australian travellers to exercise a "high degree of caution" if visiting Fiji. But Australia, it seems, still wants you to go there.

The minister said: "It's not at a level which is for people to reconsider their need to travel. And one of the reasons that we have in mind for that is that whilst people do need to exercise a high degree of caution, again we don't want to do things that have an adverse impact on the people of Fiji themselves."

Fiji today might just be the perfect place for a holiday.

The resorts are nearly empty, so you're bound to find a bargain and you won't have to fight, Homer Simpson-style, to keep your place in the line of the all-you-can-eat seafood buffet.

There's a great misconception that authoritarian countries are somehow dangerous places for tourists.

When was the last time a West Wyalong PROBUS member was mugged on the street in North Korea? And who was the last Contiki wanderer to have his pockets (or for that matter, his wife's bottom) pinched in Saudi Arabia?

Sure, there might be a limit to what you can download in Riyadh or Pyongyang (especially if the web address includes "democracy", "equality" or "Bardot", as in Bessie). That's just the price of having your liberty curtailed. But you can bet the serious thieves and the bum pinchers will have been dealt with long before you arrive.

So, too, are you likely to feel perfectly safe these days in Fiji, where B1 promises to impose order with an iron fist. Why, you'll find soldiers on every corner, the streets have never looked cleaner and the newspapers carry only good news.

The veteran ABC Pacific correspondent, Sean Dorney, was expelled from Fiji last week for reporting the truth about Frank.

(Dorney, for the record, is one of the most courageous and feisty foreign correspondents I've met. A decade ago his dexterous oratory helped extract a carload of journalists, including me, from an unholy predicament in the Solomon Islands involving former Fijian coup leader Sitiveni Rabuka and 30 or so heavily armed, seriously stoned Bob Marley impersonators. But that is a story for another day!)

Dorney got the mischievous tone just about spot on, I'd say, when asked on The 7.30 Report the other night if he'd go to Fiji as a tourist.

"Absolutely," he said. "I mean, the situation in Fiji at the moment is there's an extreme amount of order but there's no law . . . so, yeah, if you are thinking of going to Fiji, now is probably the time to go because things are extraordinarily cheap because those tourist companies are really suffering and they're trying to get everyone to go. So, it might not be great for democracy but it might be good for tourists."

That's the thing about authoritarianism Fiji-style, of course. There's plenty of enforcement but no enshrined rules . . . unless the "Dear Leader" himself decrees them.

Those who know Bainimarama always mention his conceit. They say despite his claim he doesn't care what New Zealand and Australia say, he actually craves legitimacy and the respect of his regional neighbours.

Why give it to him by spending your tourist dollars there? Our Government should lead the way by increasing and carefully targeting its aid to support ordinary Fijians, while encouraging Australians to shun a bully who, despite his good intentions, is single-handedly turning Fiji into a pariah state.