Fijians good nature to be tested

We Fijians need to get angry.

Our good nature is something that the military regime has taken advantage of. We are too busy putting food on the table to look elsewhere or to be bothered enough to take bold action against the regime that has stripped us of our rights to freely elect our own leaders, to speak, to think and to determine our own future. 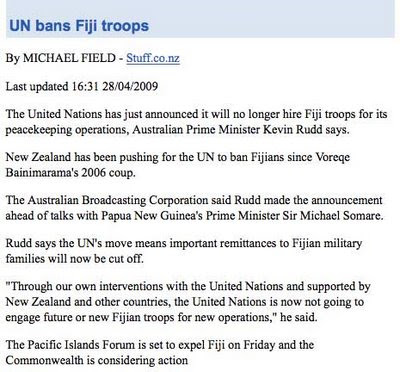 To help us along the way, finally some resolve. Thank you, vinaka to the UN for putting the money where their mouth is.

Fijian soldiers - not all of them - but the ones that have proven they can damage a whole nation and generations of children, need to learn when enough is enough and the bad behaviour has to stop.

It seems this needs to happen, or we will just sit here day after day lamenting our bad fortunes and wringing our hands but not doing anything about it. It seems we need to get hungry.

The military regime is in it for the power, the glory and what money they can get their hands on to fatten their own troughs. Lets be honest, the coup was never about anything else.

Now it is time for overseas tourists to start thinking about ethical travel as the taxed tourist dollar is one of the last treasure troves the military can dive into to perpetuate their illegal and criminal reign.

Please don't even think the tourist dollar will be helping us the subjugated people of Fiji, who without international tourist dollars would surely starve?

Tourism operators have laid off so many of us and/or put us on reduced hours that only a guaranteed safe political climate can resurrect the whole industry now.

Anyway the tourist resort with the lovely beach and swim pool is hardly Fiji. Who takes tours to the real villages and to the squatter settlements where most of the resort workers stay?

I can hear all the usual arguments now - sanctions etc .... but what I am saying is this is a necessary sacrifice - the world needs to help us bring this regime to their knees. Cut off this regime's purse strings. Channel the necessary aid via the reputable NGO's in this country not through the regime.

It is quite simple: dictators oppress the people, silence the poor and control the media. And how is clamping down on civil liberties, freedom of speech and removing a fair justice system - all by force - acceptable in this day and age?

But then again because we are all given free will at the end of the day your decision will be based on personal political principles and I wish you well in your inner deliberations. While you are at it, consider this - the beauty of a democratic society is that you can and do criticise your goverment - enjoy this freedom while you can.

Posted by Discombobulated Bubu at 10:21 AM

Email ThisBlogThis!Share to TwitterShare to FacebookShare to Pinterest
Labels: Fijians good nature to be tested

So so (to take a leaf out of the Naisoso PR spiel) true D-Bu.

We need to get angry but remain in control and peaceful.

How much more will it take for voices to publicly speak out against this tyranny?

Most of the worry re: over 55-ers is still hypothetical at present. When the gravity of the situation sets in and we have continuously accepted it all silently, we may discover that it is too late to demand better.

Little by little, inch by inch Bainimarama is take, take, taking everything -- even the lifelong blood, sweat and tears that these people have poured into building up the country...whatever their vocation.

With clenched fists I am earnestly hoping that people fight back soon.

Anyone and everyone is next!

Exactly Bubu! No amount of dressing things up by apologists and 'appeasers' will change what has happened. People are slowly beginning to realise that Frank and his merry band were never genuine, its just that they used sometimes plausible intentions to further their own ambitions first and foremost - using them as excuses. It's not as though there haven't been promise after promise broken, changes in the reasons for the coup.
A coup to end all coups - yea right! But THIS one is different! -yea right! It's not racial - yea right (when you systematically destroy indigenous institutions one by one)!
Commentators, sympathisers and bullshit artists can theorise and waffle all they like - they can't adequately explain the record so far.
Fiji's sovereignty, the will of its people, their rights and their wellbeing have all been fucked over by a few very arrogant people that think they know better and use every opportunity to put themselves above those that are actually paying for their stupid little games. When it all began, I'm not sure many of them actually realised the seriousness of what they were doing - that seems evident by many that are now trying to wriggle and squiggle their sorry asses out of the mess they've had a hand in (everyone from Chodo to Yabaki to Barr and all those pathetic creatures that are now probably hoping noone noticed). People noticed!