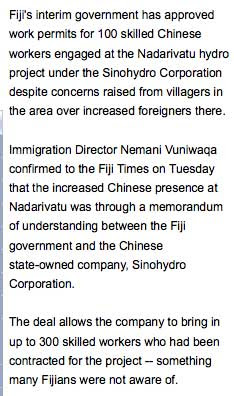 Here's the beginning of the reality of those Chinese loans to our poor nation.

While thousands of us lose our jobs and are forced to retire today, our taxpayers dollars are being used to pay foreign workers - neo-colonisation in action.

These are the strings tied to the loans that will make Bainimarama and cronies rich whilst the rest of the country withers, wilts and dies.

I am seeing many many more new Chinese in Fiji - are they being left here after they finish their projects?

A couple of months ago we read that about 100 Chinese workers were imported specially by the Chinese Embassy to build their new chancery in Suva denying local contractors and construction workers from participating in their project.

Now I understand there are more Chinese to be imported to do roading and housing contracts as a condition of loans from China.

We should be very afraid of this new colonisation happening right under our noses and all with the blessing of the military junta who even though they mouth it, defy and deny accountability to us the taxpayer.
Posted by Discombobulated Bubu at 10:24 AM

Please Shaista, and or Bubba - share your wisdom with us in response to DiscombobulatedBubu's post. Or is it that Chinese/Indian neo-colonialism = OK, everyone else (including Fijians themselves) = NOT OK. IF you're pressed for time (as I'm sure you are - given such a busy busy schedule) THEN perhaps a brilliant young cadet from Bugleboy's Ministry of Information and Brownshirts could do the honours on your behalf if she can find a park ELSE never mind most people (there are ever increasing numbers) realise any response is likely to be a croc of shit anyway

Good one D-Bu. I nearly missed that story as I've stopped buying paper's because of the censorship.

Not only that DeBu. The workers come from China in an official capacity. And in an unofficial capacity the street walkers come over to relinquish them of the money they make (which should have been paid to local workers, if the corrupt regime ever bothered to insist that local workers were hired).

This is exactly the same thing that the Chinese government has done in Africa for decades. And Vore Bainidia doesn't give a sh1t. He just wants their money to prop up his corrupt house of cards regime.
God bless Fiji