Bainimarama keeping secrets whilst using public funds for own ends

In a follow up to their earlier call for the PM and AG to declare their salaries, the UFDF has today called on Commodore Bainimarama to stop his political campaigning at taxpayers’ expense.

The UFDF has called on Commodore Bainimarama to stop his political campaigning at taxpayers’ expense. He has to change his mindset and come to terms with changing circumstances.

The UFDF said it was unacceptable for him to continue as commander of the army having already announced he is running for parliamentary office.
If he is serious about holding free and fair election in 2014, than in the interests of fairness and normal standards of good governance, he should agree to stand aside and make way for an independent civilian caretaker administration to guide the country to elections. 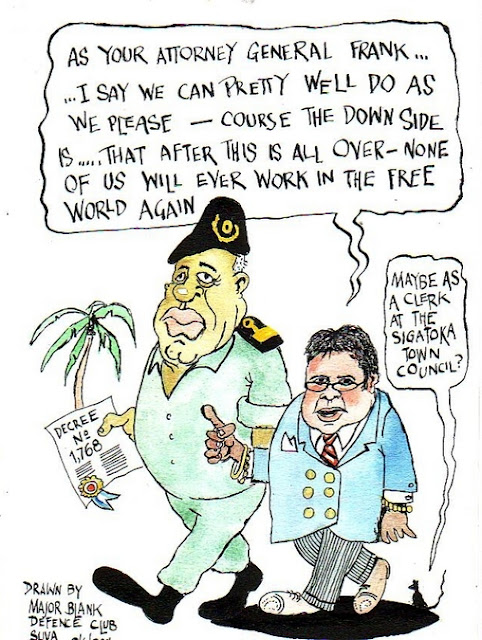 The future is now. Commodore Bainimarama should open his financial affairs and details to public scrutiny now as a demonstration of the accountability and openness he so often calls on others to practice.

The UFDF said there is no excuse for further delay.

As prime minister, he has an obligation to tell the taxpayers who pays his salary whether he is earning approximately $1,300,000 a year, as reported recently.
Similarly, Mr Sayed-Khaiyum must disclose his own salary and that of the other ministers.

It is also time for Commodore Bainimarama to reveal to the nation what political plans he has for the very unpopular Mr Sayed-Khaiyum who is also the most powerful of his ministers.

In fact, Mr Sayed-Khaiyum maybe the most powerful politician in Fiji’s history, even though he is unelected and has no mandate. The UFDF said Mr Sayed-Khaiyum will presumably be Commodore Bainimarama’s running mate in the elections. They have worked closely together for more than seven years and form the narrow foundation of the current regime.

So Prime Minister, get on with it! Do the right thing; face your moment of truth, embrace your own political reforms and let’s get on with the battle of ideas you have called for.

Posted by Discombobulated Bubu at 10:51 AM

Email ThisBlogThis!Share to TwitterShare to FacebookShare to Pinterest
Labels: Bainimarama keeping secrets whilst using public funds for own ends

WE SUPPORT BAINIMARAMA AND THATS IT...