The message that Fiji's ImpoConstution brings

When I was reading the sinister and malignant document that Baininarama's Himmler figure has authored and is getting ready to IMPOSE upon the passive people of Fiji, I was reminded of a message from wiser beings than ourselves that appeared in 2002 in the form of an impressive crop circle formation on the outskirts of a small village in England . 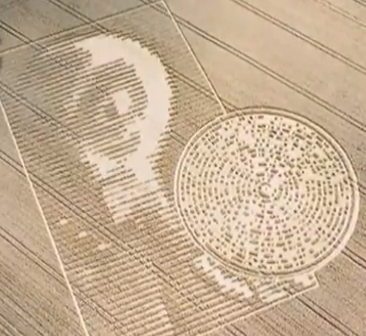 It consisted of an "alien face" with a circular grid containing a coded message.

When the code was broken, it read:

Beware the bearers of FALSE gifts and their BROKEN PROMISES.

Much PAIN but still time.

There is GOOD out there. We OPose DECEPTION.

I feel there is a message here for us the people of Fiji as well.

It is quite clear what the alien Bainimarama and immigrant Kaiyum are doing from their peculiar spaceship.

They are entrenching power unto themselves via this document they are calling 'the supreme law' .

They are forcing the people of Fiji to bow to their rules by ripping away the customary, cultural and land rights of all indigenous Fijians.

They are banking on the fact that flowery legal language contained in this heinous document disguises the rude reality of alienation of native lands and qoliqoli, in favour of the regime's new Chinese, Indian and East European 'friends'.

Kaiyum's thesis calling for a "sunset clause' to traditonal Fijian customs is becoming a reality when he successfully used Bainimarama to cull the GCC, wrenching apart the traditional authority of the Vanua and Provincial infrastructure and and replacing it with their own demand for self-abasing grovelling to the military and to the personality cult of these two men.

Similarly they have culled the traditional influence of the Lotu, and installed a blanket of fear over the people's traditional respect for authority.

They have used taxpayers funds to embark on a huge propoganda exercise to pull the wool over rural Fijians, and they have used the same funds to bribe their way through Fiji handing out classrooms, sewing machines, electricity and solar stations to buy unsuspecting Fijian loyalty.

Transparent in their deceit.

Not accountable to anyone.

I believe there is still time for those good people of Fiji to wake up and do their utmost to reject this latest attempt to stifle all opinion and impose the cult of Bai'nKai upon us all.

There is to be a protest against the IMPOSITION of a document that the military regime will be foisting upon Fijians on Sept 6th 2013 outside the Fijian Embassy in Wellington NZ.

Fijians in NZ are encouraged to meet at midday for this protest. 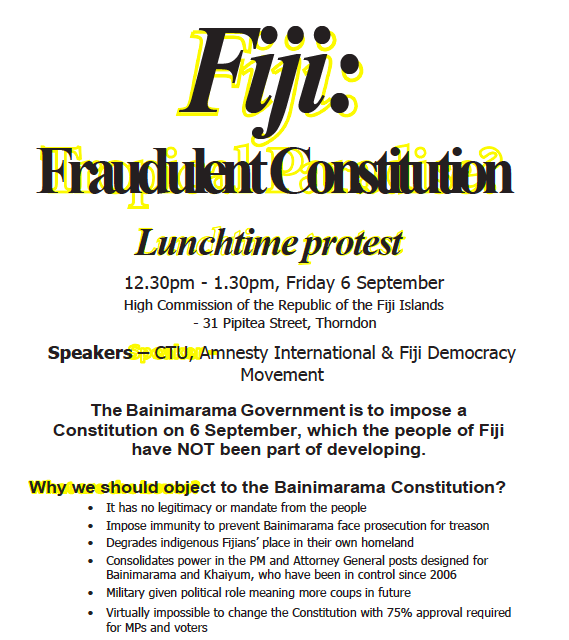 Email ThisBlogThis!Share to TwitterShare to FacebookShare to Pinterest
Labels: The message that Fiji's ImpoConstution brings